But according to OLAY: “You can have skin that looks too young for it.”

I know, I know, please will I stop ranting about the nature of the beauty industry, but it’s everywhere I turn. The more aware I become the less I want to participate with mainstream society. (I never did that well to begin with, but still.)

I was watching two and a half men the other day, which I thought was a funny and cute show, but I guess I haven’t seen the show all that many times. I hear a lot of people talk about how funny it is, and it has its moments, but wow is it chauvinist. In these two episodes I saw a woman conjoled with shopping and two men bribed into loving their mother’s boyfriend when he paid for their prostitutes. Lovely, huh?

I do not want to become one of those people who is insists on political correctness. To be honest, I can’t stand being in the room with that type of person and I certianly don’t want to be friends with them. Life should come naturally and not feel contrived but when we consider the constant force with which the beauty industry attacks our self esteem, it’s no wonder that the world is filled with double standards and negitive images of beauty.

I’ve decided that it’s best to relinquish all domestic responibilities at Christmas time purely beacuse manipulating the cart at the supermarket will give you a nerveous breakdown. I wasn’t going to cook for anyone this year. It was a Bah-humbuger for me. No cookies, no roast, but I gave in, I went and really DON’T DO IT.

Sure, We’ll be a family, we’ll enjoy each other and laugh and smile and feel joined, but I’ll remember, I’ll know that the Christmas spirit isn’t universal. It is strangled and suffocated by the parking, the mall and most of all, the supermarket!

SO the cover of this month’s star (I think, might be another rag mag) features an article entitled “Hollywood’s Best and Worst Beach Bodies” On the left side is Hayden, whatever her last name is from Heroes and on the right side is a picture positioned just so that the woman in visible from only the neck down. 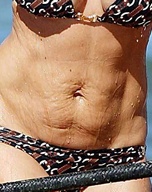 This headless woman is less tight than Hayden, who may I remind you isn’t even twenty years old yet.

Turns out the headless woman is Cindy Crawford, Supermodel and possible canidate for Goddess of Beauty. HELLO!! This woman has been the standard to which we’ve lived up to for years and now because she has kids and she’s older than she used to be you want me to replace her with the younger model and compete with that?? Cindy in gorgeous. Always will be.

The world needs to get a handle on this out of control beauty issue, which may be why I took fault with the intro to the Beauty Myth all those weeks ago. This issue with beauty and aging is an impossible burden. BEAUTY GROWS OLD. OLD DOES NOT EQUAL UGLY!

THIS WOMAN HAS AN AMAZING BODY:

Notice that this picture was taken on exactly the same day as the “worst” shot.

By the way, Cindy has been supporting another favorite in the fight for the beautiful, yet normal woman, Jennifer Love Hewitt.

So, I read today that New Mexico is the 15th state to refuse Abstinance-only funding! This is a state very close to my heart. It is where I’ll be married and one of the most beautiful places on earth so please give a cheer for New Mexico this holiday season.

Tonight I’m thinking about ageism and the double standard in regards to women. In general your female heroine is easily under 40, right?

Take a look at these two. Both would be catagorized as sex symbols, don’t you think? This year Viggo will turn 50. It is my contention that there are few to no women who are 50 that would easily be catagorized as “sexy symbols,” still sexy, maybe. Isn’t that sad?

Women are strong and sexy way past fifty and in a perfect world magazines and hollywood understand this. Recently, in a creative writing class I wrote a short story about the screwed up love lives of sixty-something singles, the most consistant comment by my peers was a note that people in their sixties don’t have “love” issues. Please, life does not happen only between the ages of 18 and 45.

02) Gay marriage will encourage people to be gay, in the same way that
hanging around tall people will make you tall.

03) Legalizing gay marriage will open the door to all kinds of crazy
behavior. People may even wish to marry their pets because a dog has
legal standing and can sign a marriage contract.

04) Straight marriage has been around a long time and hasn’t changed
at all; women are still property, blacks still can’t marry whites, and
divorce is still illegal.

05) Straight marriage will be less meaningful if gay marriage were
allowed; the sanctity of Britany Spears’ 55-hour just-for-fun marriage
would be destroyed.

06) Straight marriages are valid because they produce children. Gay
couples, infertile couples, and old people shouldn’t be allowed to
marry because our orphanages aren’t full yet, and the world needs more
children.

08) Gay marriage is not supported by religion. In a theocracy like
ours, the values of one religion are imposed on the entire country.
That’s why we have only one religion in America.

09) Children can never succeed without a male and a female role model
at home. That’s why we as a society expressly forbid single parents to
raise children.

10) Gay marriage will change the foundation of society; we could never
adapt to new social norms. Just like we haven’t adapted to cars, the
service-sector economy, or longer life spans.

A amazing feminist sent me this. She’s funny, beautiful, loveable and truly one of my favorite women on the planet.

In Manhattan a man has sued a number of night clubs, claiming that ladies’ night specials that offer free or discounted drinks to women discriminate aginst him. The night clubs’ lawyers are claiming that the whole idea is absurd. The lawyers argue that if ladies’ nights are illegal than so are early birds and kids eat free prmotions because they discriiminate against those of other ages. As far as I’m concerned the absurdity of the ladies’ night special is so much more than a possibly unfair discount.

There are a number of cases such as this one popping up around the country. The New York Times featured an article about a lawsuit against a Las Vegas Gym.

The idea of Ladies’ Night never really sat right with me. It seems to ring the same bell as the teen that took home ec. to meet girls. Ladies’ nights aren’t really about women at all. There about getting women to clubs so that men will show up and harvest the crop. EWE!

So, do I feel this man is being discriminated against, No. Do I want to go dancing somewhere that offers special ladies’ nights, NEVER!

Geisha are beautiful. We cannot deny that but can we accept that they still exist? Many believe that geisha are prostitutes, which they are not but they are women who dedicate their lives to pleasing and entertaining men. Is this an art form?

Please read this article posted on Catherine Morgan’s site Women 4 Hope, which exemplifies just how terrifying people can be, and also show us that abortion is not a one sided decision.

Being Feminist turned me on to this story, which is so horrifying. A young girl chose not to wear her hijab (headscarf) and her father strangled her.

Last year a student I was working with created a project on honor killings. She posted ages an cities of over 100 young women who had been killed for committing “crimes,” such as being raped.

Questions of religion are always touchy, but this idea, the idea that a woman disgraces her family by innocently walking home and getting attacked or by showing her face, is from another time. We cannot allowed women to be killed for innocent actions. Disown them. Ignore them. Turn them out on the street in the cold. No need for death. We’ll take them in.