So there are some posts that I’ve been meaning to write but I’ve been rushing to tie up loose ends regarding my submission to Hunger Games and Philosophy (edited by George Dunn and Nick Michaud) and now my thoughts on these bits and pieces are getting untimely so consider this particular post my way of saying got any thoughts on this nonsense:

1. Recently, yesterday in fact, I was reading Feministe and I became aware of a  30-year-old McCain staffer’s marriage to a girl who was 17 when they met. There are some semantics in this situation – she was of age when they married and they are very wealthy, blah, blah, blah… So the conversations about statutory rape and what not have gotten pretty overlooked, but what is the deal with women wanting to get married at 17? Ouch, say. Also, there is something so weird about how republicans can twist culture’s moral rules – think Bristol Palin pregnancy – and it’s okay but when liberals do this crap the world goes haywire.   Scarier is Doug Hutchison’s (51) nuptials to a sixteen year old.

2. I need to mention www.xojane.com. I’m not sure how many of your remember Sassy Magazine but as a teenager it was my bible and it’s existence started a life long love affair (from afar) between myself and Jane Pratt – who if you don’t know was also the editor of Jane Magazine for most of its lifetime, and I would argue that her retirement from the magazine caused its demise. That said, like other feminists, I am not feeling Pratt’s newest endeavor 100%. Perhaps I return to my not so third wave feminist outlook – but the website is  way more junk than edgy smart – a little more serious please! I want headings like politics and news – not just sex and beauty. What up, Jane?

3. It’s worth noting Anushay Hossain of ANUSHAY’S POINT. I first discovered her on Broadminded. She is Molly and Christine’s Feminist Broad, and her blog is always interesting and worth reading. Subscribe. Hey, while I’m at it subscribe to Feminist Cupcake, that blog is the bomb-diggity – you should subscribe to that blog too. In particular Anushay has written an informative ditty about Saudi Women’s Protest against the ban on women driving in their country. 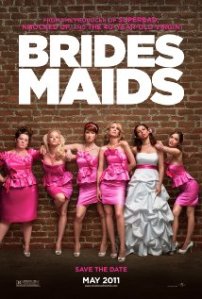 4. Speaking of Broadminded – Yesterday morning I caught the last bit of a conversation concerning bullying and cyber bullying among teens. Unfortunately, I am not sure of their guest’s name but he said something about how our television shows and movies present adults making fun of people or embarrassing pranks as so funny and humorous – which in turn got me thinking about the movie Bridesmaids. I meant to review this film for you guys – but I’ve been busy, like I said.  There was feminist potential here but I think it sank. (More later). With regards to adult bullying, sort of, so many movies, including bridesmaids present other people’s embarrassment as something we should laugh at. Admittedly, there are moments when someone trips or slides on a piece of lettuce (circa 1996, June and Ho – Rye, NY) and you can’t help but laugh. But still – is food poisoning that causes you to poop your pants funny?  I say no. Maybe I’m too empathetic – but watching other people’s embarrassment – embarrasses me.

5.  Finally, I wanted to turn y’all on to Micheal Kimmel, who is a spectacular example of a male feminist. I am presenting at the NWSA conference this year and he’s speaking and I absolutely can’t wait. I also teach his article “Masculinity as Homophobia: Fear, Shame, and Silence in the Construction of Gender Identity” in my classrooms. Recently, on his Ms. Blog, that considers the whole Wiener incident, “Ah-nuld, DSK, Weiner–And Us.” A worthwhile read.