If you’ve ever considered how representations of female bodies contribute to women’s negative body image – then you’ve realized that Barbie, the icon of little girl’s toys, may not be the best influence on a girl’s relationship to the reality of her body. Take a look at this comparison image that has been floating around the internet lately:

The numbers detailed are downright absurd. Her wrists and ankles are exactly the same size. Her bust is distinctly larger than her hips – and her waist is half the size of her bust. It seems like if she was a living woman she would fall over. Actually, we know she would fall over because her feet are permanently on tip toe so that they can fit into her plastic heels. That said, even if we put her unusual foot shape aside, Barbie is not a real shaped woman.

Because Barbie doesn’t even emulate the proportions of a living woman and therefore is an arguably poor influence on perceptions of women’s bodies, graphic designer Nickolay Lamm created The Lammily Doll.

This doll and Barbie seem to come from two very different places. Acorrding to the Lammily Website:

Another positive attribute the  of the new doll that the website does not mention is that Lammily  represents more diversity than Barbie. She has brown hair and a darker skin tone than Barbie – which means that she can be understood as either Caucasian, Hispanic or of mixed race – whereas Barbie is pretty much descendant from Aryans.

Lammily was crowdfunded and she was a great success. Lamm initially posited that to manufacture his doll he needed $95,000. He raised $465,952. This kind of response points out that we are hungry for representations that actively reject impossible body ideals and embrace a more empowered image of womanhood.

While I know Lammily is a step in the right direction – I find that I am still disheartened because I don’t really feel like she looks like the women in my life. She still idealizes a certain age and health standard and this “average” seems almost as mythical as Barbie’s disproportionate one. Perhaps Lammily needs some friends – a black girl, a fat girl, a differently-abled girl, a trans girl, a pear shaped girl, a girl with thick thighs, a girl with a juicy bootie, a curly haired girl, and yes, a blond girl… Obviously I could go on for ever.

What I’m trying to say is that Lammily is awesome, but she is just the beginning. If we really want to forward positive representations of people’s bodies than we need to genuinely represent ALL bodies.

This was originally posted @Bitchtopia

Okay,  I know I’m obsessed with this but I want to show you some videos and Susiekline asked me if on DWTS they plagued Amber with chatter about her weight — and if they did I can’t find it but Listen to Amber talk about her own body in this Cha Cha clip:

In fact, Amber continually discussed her body and argued that she wants people to understand that a fat body is a body, period – and that this body can dance!

Tango: (Love that he tosses her around in this one. Also, she’s so elegant).

And then there is this one – the freestyle: This moment has me crying again – she is so beautiful, dynamic and graceful – she destroys all the negative ideas that people have about the fat female body.

I know I’m a sentimental fool but in this world that puts down and torments fat women, seeing Amber Riley win Dancing with the Stars, made my cry.

And then she said this:

And now she’s my hero. I love to see strong proud women open their mouths and voice the reality that your body shape/size/color should not hinder you.

What follows are two images that ask us to consider the unrealistic nature of Barbie’s physical build. The first image is a life size Barbie – i.e a model of Barbie’s measurements if she were life-sized – compared standing next to a young woman and an image of current Barbie next to what Barbie would look like if she had measurements that were more in line with the reality of human bodies:

In April of 2011 CBS NEWS noted that with her current dimensions, Barbie would be diagnosed as dangerously thin – and possibly suffering from an eating disorder. So why not change her — why not make Barbie more in line with a realistic body type – or at least give parents the option. Why not make Barbie dolls in a variety of body types? Perhaps — we need a petition.

I’m not trying to slam Mattel – in fact, last year they produced presidential candidate Barbie – sponsored by the White House Project which was pretty cool:

But the reality here is that — Barbie creates unreal body expectations in the girls that play with her … remember the woman who has actually had multiple surgeries attempting to make herself look like Barbie. Just sayin’ 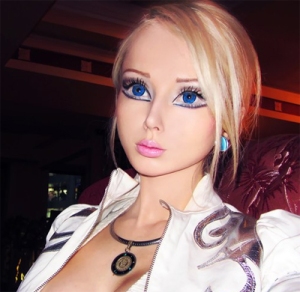 About Face – a body-positivity activism group protested in front of Victoria Secret this weekend. You can read about their protest here I love it when people take action against the powers that oppress them, particularly when their action speaks volumes to a public that might not even realize how they are being oppressed. That’s … END_OF_DOCUMENT_TOKEN_TO_BE_REPLACED

While I hate the term ‘plus-size’ because it instinctually implies larger than ‘normal’ – I love that the Huffington Post published and advertised (via an emailed mailer) and article entitled “Best Plus Size Models: Who is Dominating the Industry Right Now” and I love that they included some models who are ‘genuinely’ fitted to larger clothes – versus the more traditional larger sized model who is anyone over a size 6.

It’s also worth noting that two of the mentioned models are on the cover of French Elle and Quebec Elle: Justine LeGault and Tara Lynn. Bravo Elle! How about some of this body positivity on US magazine Covers.

That said, there is a part of me that wonders what impact magazines still have. Do any of you regularly read magazines or has our western  media guzzling culture become completely reliant information derived from the internet and other high-tech sources?

Either way – check out the Huffington Post article – I smiled.